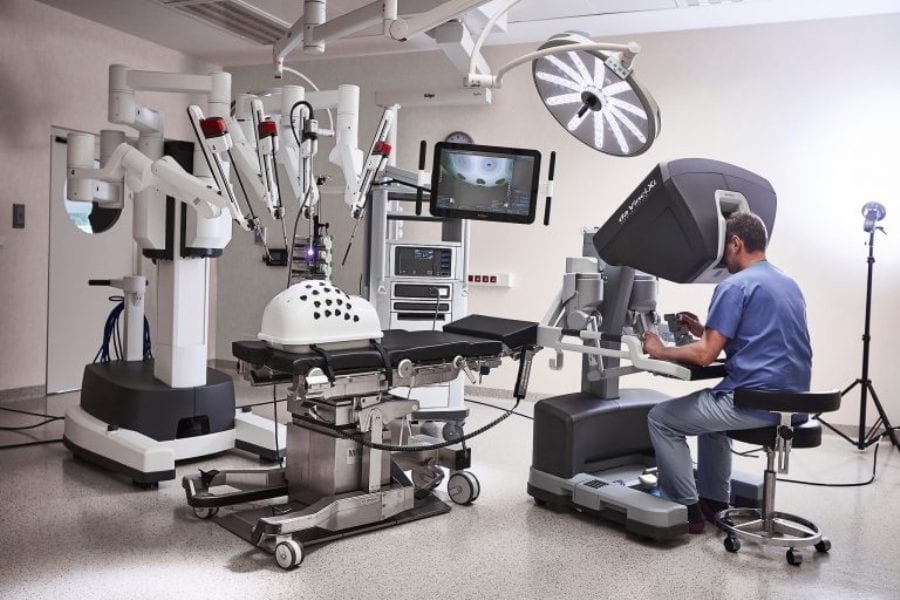 Da Vinci surgical system – innovative device carrying out surgical interventions making miniature incisions with manipulators and special 3D cameras. With this method, doctors see a clear picture of the pathology site and can operate with ultra-precise accuracy. All manipulations are performed under surgeon supervision.

Da Vinci – surgical console, a rack with 4 automatic manipulators, a special high-performance InSite® image transmission system and quality EndoWrist® instrumentation. At the console, the doctor observes manipulation fields, and by covering and moving handbrakes, he/she carries out required actions. The device transforms the actions of the doctor into the movements of the device.

For what cases is Da Vinci surgical robotic system implemented?

Robotic assisted laparoscopic surgery – world progress in minimally invasive intervention. Actions clarity and mass of options for the positions of the robot made it possible for doctors to operate more efficiently in areas that are hard to reach for human hands and laparoscopy.

Today, radical prostatectomy – most popular robotised surgical tequinic worldwide. If earlier prostate removal could impair erection and cause problems with urination, now nerve-sparing manipulation carried out with the Da Vinci device has made it possible to greatly reduce such risks.

Robotic assisted surgery Da Vinci  has a lot of privileges in comparison with well-known tequinics:

Doctor also receives navigation and control tools created with the help of innovative technologies in order to be able to perform high-quality nerve-sparing interventions. The device can perform its functions exclusively under the control of a professional, and Da Vinci’s actions depend on his/her decisions. The success of such complex manipulations as prostatectomy directly depends on professional experts’ skills. Da Vinci robotic assisted surgery only helps to expand the range of capabilities of a specialist, but is not a substitute for skill.

When performing an intervention with this device, the doctor does not work directly with the patient. All actions are carried out by three manipulators with innovative tools, and a stereo endoscope shows specialists surgical area pictures in 3D format.

Doctors have access to a high-quality  image area where the operation takes place. Therefore, the specialist works accurately, saving nerves and blood vessels that feed anatomical structures. Robot makes it possible to carry out many surgical procedures with just a few incisions, 1 cm maximum.

People endure minimally damaged surgical manipulations much easier and easier than abdominal ones. Minor discomfort may be caused by gas pumped into the body to facilitate the doctor’s manipulations. It completely leaves patients’ bodies about a day after procedure.

Robotic surgery is a revolutionary development, thanks to which physicians are able to carry out even compound surgical interventions as accurately as possible and without serious complications, and technical functionality of operating team is significantly expanded when using a robot assistant. Today, the world’s leading clinics use the Da Vinci robot assistant. Approximate Da Vinci robotic surgery price is 12-18 000 USD.