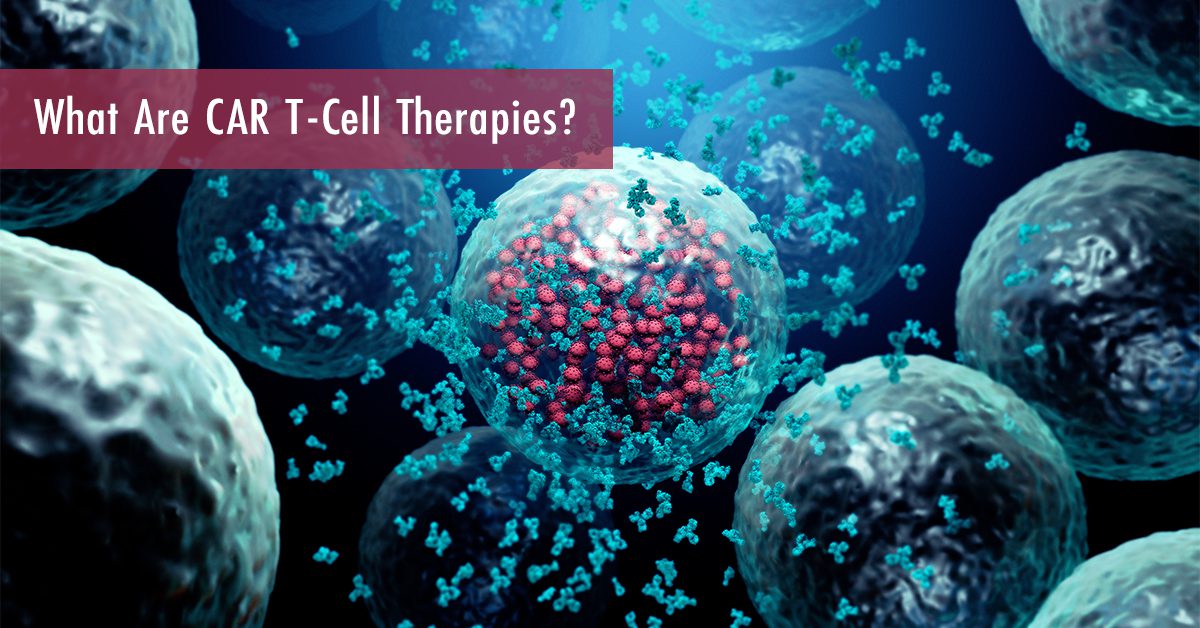 CAR T-cell therapy is a fundamentally new method of fighting cancer cells. This therapeutic technique involves the use of individual T-cells – T-lymphocytes – radical and powerful cellular structures “defending” organisms. Cells are genetically programmed to recognize and destroy cancer cells and parts of the cancer itself.

T-lymphocytes undergo reprogramming and structuring modification in laboratories, where they get after they are extracted from the blood of patients. When modified, changes are made to genetic cellules’ structures that are necessary for these structures to be able finding out cancerogenic formations with help of a separate group of antigens-proteins. The structure of the T-lymphocyte is modified artificially by introducing a virus created in the laboratory.

The number of T-lymphocytes that have undergone modification is increased by artificially catalyzing the process of cell division. Next, a drug containing these cells is administered to people – the procedure has similarity with blood transfusion. Cellular structures that have undergone reprogramming target and attack cancerous structures, destroying them completely, however, without harming healthy ones.

How exactly does CAR T-cells therapy work? What is the role of lymphocytes in the fight against cancer?

T-cells – important IS components. They are leukocytes, in which proteins lay on surface and work as receptors. They move by blood flow, studying whether there are viruses or bacteria in the body. These foreign components also have antigen-proteins.

Immune receptors and antigens are linked, as a result, T-cell destroys foreign cells. Cancer structures also have antigens, but T-cells rarely adhere to them because they often don’t have the right receptors.

Does it always help?

Therapy success depends on the type of carcinomas. Up to 90% of patients with leukemia can be cured with CAR-T. Nevertheless, this therapy is still considered new, so CAR-T has not yet shown all its pros and cons.

What cancerogenic pathologies are treated with CAR-T therapies?

Doctors choose CAR-T if the usual chemotherapy does not give the desired result or in case of a relapse.

The FDA has selected 4 drugs for the treatment of CAR-T in America. Doctors may only implement them to eliminate certain blood pathologies.

How is the process

American oncologists have confirmed that such treatment can last for months and consists of several stages.

Specialists extract cells through an intravenous line. Next, leukocytes are removed, and then the device returns the rest of the blood with the help of a second dropper. In the donor office, the material is collected. This process lasts about 2-3 hours. If a special catheter is indicated according to indications, then it must be installed a couple of days before the fence. 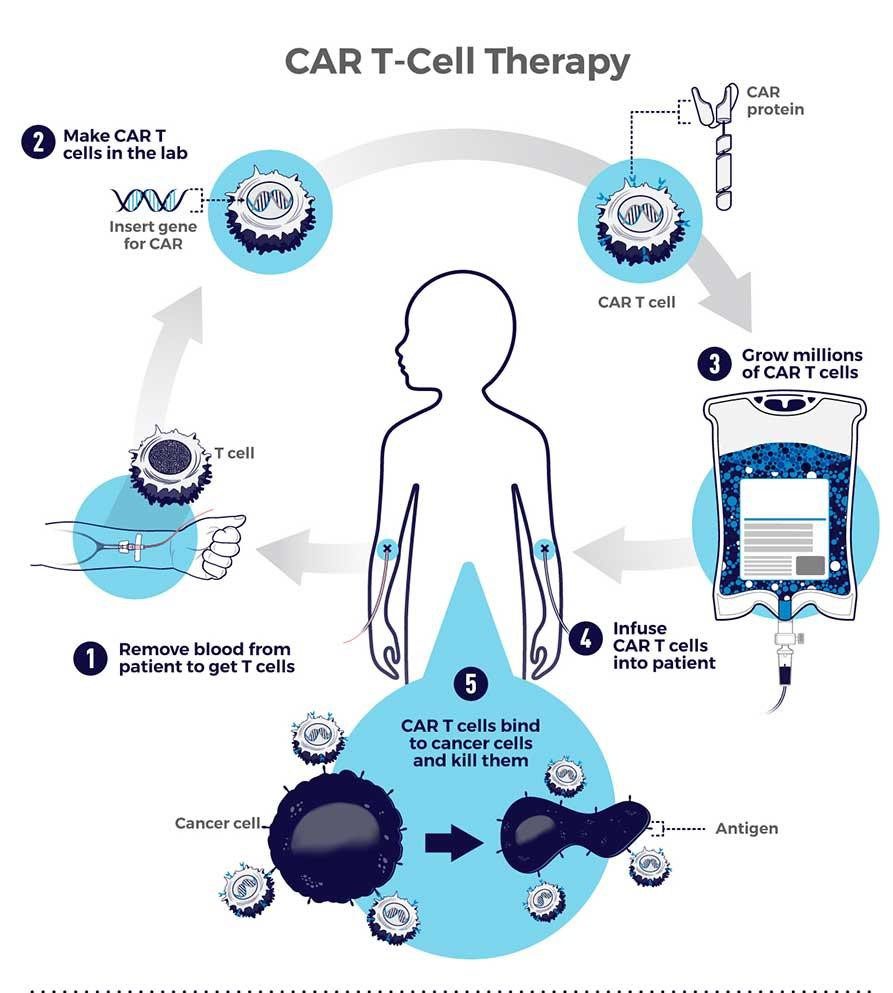 T cells are separated from the rest and examined in laboratories. There, CAR is added to cellules CAR T-cells are got from. Next comes the process of waiting for the number of cells needed to fight the cancer.

After the leukocytes have been removed, T-cells are isolated, sent to laborants, and changed by inserting special chimeric antigen-receptor genes. Then, ready-made CAR T-structures are obtained. Further, these cells are grown and propagated. It may take several weeks to create more CAR T-cells.

New CAR T-bodies are introduced through another intravenous line. Doctors may first recommend chemotherapy: IS preparation for CAR T-cells introduction.

If you carry out this procedure in a hospital, you will be admitted to a clinical facility. It often happens on the day of infusion. Procedure is carried out directly in the hospital ward. Outpatient CAR T-cells infusion is carried out in cell immuno-therapy department.

Structure and working principle of CAR-T

At first consultation, there is a meeting with the attending doctor and other specialists. The doctor will examine you and draw up the right therapy plan, approving the most suitable option with colleagues.

Next, you need to visit the office of blood donors. There is a check of compliance of the diameter of the veins with the collection of T-cells. If the veins do not match, an intravenous leukapheresis catheter will be used.

The next step is preparation for therapy. Passed initial consultation, practical part follows:

Initially, new technique outcomes are really pleasing. CAR T-cells method works greatly for 80-90% of people having lymphoblastic leucaemia and certain types of lymphomas. Moreover, it is about the most intractable patients who fail to get results from other methods of therapy. And in about 50%, according to actual indicators, disease completely disappears altogether.

People need to stay in the clinic for a while after therapy. Negative effects may appear within 3 weeks. Also, in a month after passing infusion, there’s a risk of infection.

What carcinomas does CAR T-cell method help to overcome?

This methodology is now FDA confirmed for:

Additionally, scientists made many laboratory studies of this method for other blood cancerogenic pathologies and solid formations. 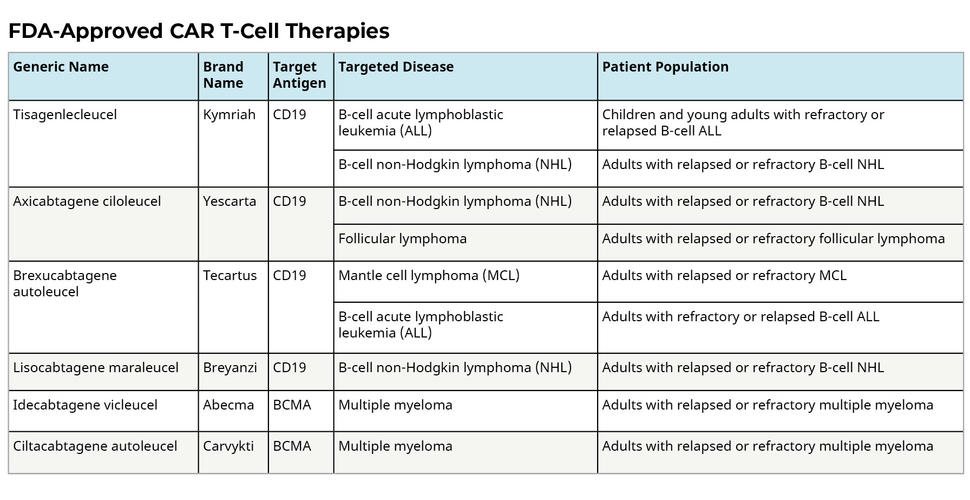 These forms are FDA confirmed in America and implemented for elimination of certain lymphomas and leukemias, as well as multiple myeloma. Treatment with CAR T is often used when other methods have failed. Examples of CAR T-cells now accepted include some of the following.

Other CAR T cell therapies (and similar) are currently being studied in laboratories with the goal of developing cures for other types of cancer.